I was inspired to make my explosions more awesome.

It seems that the trick to making cool explosions is layering multiple different types of particles. I used to just have one type of particle for each explosion, and now I mostly have three or four. Lines bursting out from the centre, expanding rings, fireworks..

This doesn't actually get the game any closer to being finished.
Posted by Brog at 09:51 No comments:

I've started doing some bits and pieces on Vertex Dispenser again, after having done nothing on it for several months. I'm going to finish it, dammit! I've actually fixed some of the problems in the network code, which is awesome (but it still crashes sometimes, more to do there) and I've done some work on the campaign - mostly trying to get the difficulty right, but in the process I've also made some of the level designs a bit weirder and scattered more shiny particle effects around: 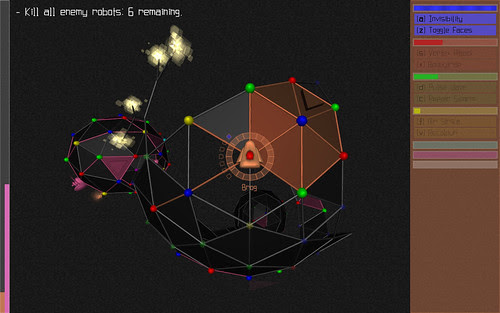 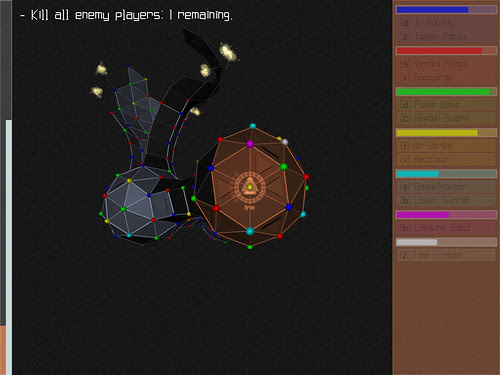 I think it's an improvement. Possibly I have just gone mad.
Posted by Brog at 04:41 1 comment:

I've played Dominion quite a few times in the last couple of days, and have been pleased to find that it's actually a good game. I had played it twice previously, and formed a quite low opinion of it despite wanting to like it because of the cool deck-building mechanic.

Most of the reason for my false impression is because I had gotten quite the wrong idea about the "Attack cards". Each time you play, you select ten card types to have available to be bought, giving variety between games. For my first game, the guy teaching me chose not to include any attack cards (actions that cause a negative effect for other players) because I hadn't played before. From this I got the idea that attack cards were like takeovers in Race for the Galaxy - an minor additional aspect giving some negative interaction between players, but with there still being a complete game without them. In my second game, the only attack card in play was the Bureaucrat (place a Silver card on top of your deck from the supply, and each other player places a scoring card on top of their deck from their hand). Scoring cards are dead weight during the game, only providing points at the end, so being forced to draw one twice slows you down very slightly. There was also the Moat (protects from attack cards if in your hand). My opponents bought lots of Bureaucrats and Moats, and there was a lot of attacking and blocking going on that didn't seem to make any difference as I won the game by quite a margin because I bought scoring cards instead. Thus I gained the impression that attack cards had no significant effect even when you did choose to play with them.

Without attack cards (and a couple of other cards like the Council Room, which lets other players draw a card while you draw four), the only interactions between players in the game are: 1) the cards of each type can run out (not very significant) and 2) the game ends when three types of cards run out OR when the 6-point scoring cards run out (very significant, but not very deep). So the strategic options basically come down to "build a powerful card combo that will get you lots of points once it gets going" or "try to end the game quickly with more points before someone's combo gets going". There is complexity in figuring out how best to do these with the cards available and the cards you draw each turn, but it doesn't depend on what the other players have, just on when they score points or end the game.

However, it turns out that with more attack cards there is quite a bit of depth in terms of how you build your deck to protect against them, and conversely in whether opponents decks are sufficiently vulnerable to them to be worthwhile. The Thief, for example, examines the top two cards of each opponent's deck and destroys any treasure cards found, stealing one of them. If an opponent has Thieves, you can protect yourself by not having many treasure cards for them to hit, instead relying on actions like the Market to provide buying power. (And conversely, if someone has used the Chapel to thin their deck and increase their chances of drawing treasure, then the Thief also becomes a more reliable choice for you.) Discovering this corrects another false impression I'd received from my second game - when choosing which cards to have, someone had said something to the effect of "you can't have attack cards without the Moat", which is ridiculously naïve - there is plenty of subterfuge you can do to defend without a blunt wall to hide behind. (In fact, I disagree entirely with choosing the cards available, and believe the correct way to select them is randomly.)

The UI still seems very very poor after playing RFTG, but this is starting to become invisible now that I know most of the cards (though I have yet to master the bizarre "alphabetical ordering" system used in the box layout). And the problem of someone having already won quite a while before the game actually finishes seems to be diminishing, from playing with a group of people of similar skill level above some minimum threshold. Overall I am satisfied.
Posted by Brog at 01:50 3 comments: