http://schedule.gdconf.com/session/12401
I'm presenting The Sense of Connectedness.
No idea how this has happened, but it's exciting.
Posted by Brog at 20:52 No comments:

I've been home for a little bit, so I've had the chance to play Starcraft 2 a little on my brother's computer. (I know, I'm a little late to the party - but being a bit of an itinerant at the moment I don't have a powerful desktop computer so I'm always behind on new releases; also I don't care.)

It's.. not as great as I was expecting. In several ways it's actually stepped backwards from the original. Certainly it looks pretty, the narrative is competent (one doesn't expect too much from videogame stories), and it has all the base-building and fighting and blowing things up one would expect. But the graphics are worse, units have less character, and it's missing some useful features one would expect these days, e.g. zoom. (Yes, there's a minimap, but minimaps were never an essential feature of the genre - they were a hack to get around the tech not being able to handle zooming out, and now it can.) They also left out 2/3 of the campaign (the Zerg and Protoss sections), which isn't such a big deal since they made the Terran section huge, but would have helped with learning to play the omitted races for multiplayer.

And yes, I did say the graphics are worse. This does not contradict it looking pretty. In the metric of being pleasing to look at in screenshots and videos the graphics are objectively better. But this isn't the primary purpose of graphics in a game! Compared to the original, the graphics do a worse job of communicating quickly and clearly what's going on. Colours and outlines have less contrast (in the original, unit colours were a lot more saturated than the background, which helped make them stand out), and unit types are less well distinguished. I once caused myself some trouble by mistaking a group of SCVs for a group of Reapers; they're both blocky robot things with glowy backs, but perform completely different roles in the game.

New goal: write non-negative posts about other games sometimes.
Posted by Brog at 15:49 No comments:

Made this for a TIGSource competition with the theme "Versus". 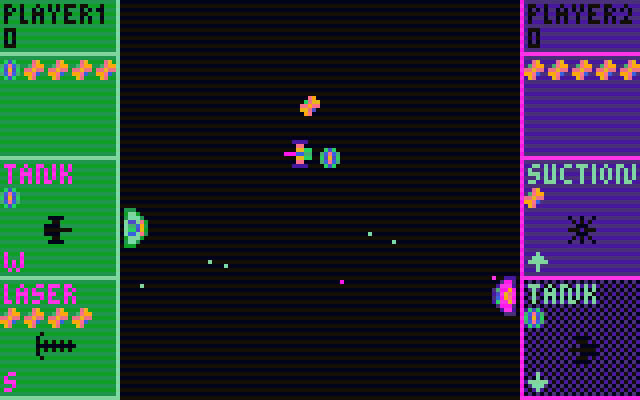 Currently it only supports exactly two players, both on the same keyboard (WASD vs. arrows). I had a vague intention to add AI and networking sometime, but they both seem unnecessary now.

It's a sort of action/strategy game. Resources pop up in the middle of the screen, players control ships moving along the edges, line up with resources to pull them towards you and collect them. Then you can spend resources to make units and fire weapons (which are chosen from random options given you).