Ok I'm going to write a series of posts about Imbroglio design, actually a bunch of this I wrote already but I didn't post because I didn't want to explain the game too much before release. Probably going to be a lot of words but you don't have to read them it's okay. 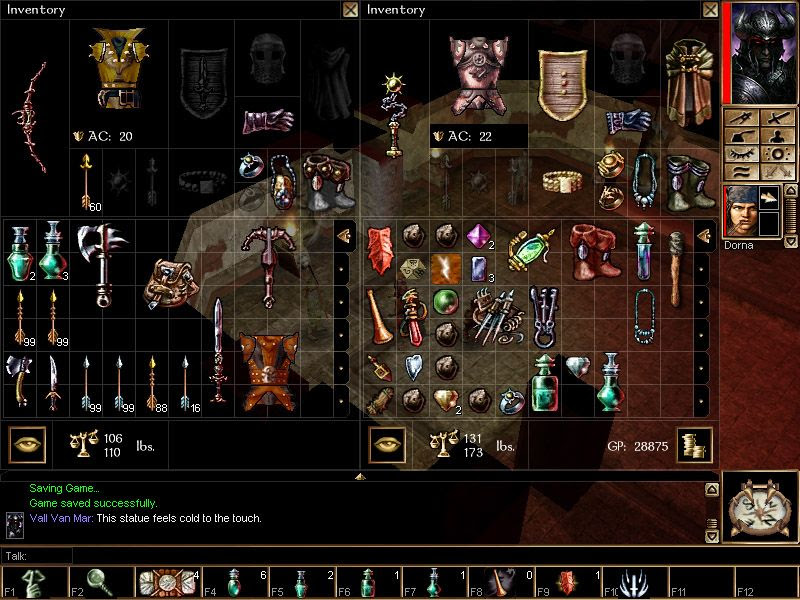 Initial idea came from looking at inventory management in RPGs. Lots of differently shaped items but it doesn't tend to matter all that much because there's so much space. You're not really forced to make exclusive choices ("this platemail takes up so much space in my pack that I can't fit many potions"). Maybe some games do this but mostly in what I've played the constraints are loose enough they don't matter.

So I thought, what if we put this on a smaller grid, then it would start to matter. Maybe the platemail takes up half your pack so it really limits what else you can carry. Force some difficult decisions about what to take.

Usually what's in your pack doesn't do anything, as well there's like ten different active slots to equip things, armour and cloak and bracelets and shoes and rings on every finger. On this side you are making exclusive choices; you can only wear one armour, you can only wield one weapon; but these choices are all between things of the same kind, you can't tank up by trading a weapon for double armour. But if we're making pack space management matter, we may as well drop the active slots and just have one small grid of active equipment. Maybe some unrealistic abstraction there but these games are full of that already. And now weapon size and shape actually matters, daggers don't need complicated extra rules to balance them against broadswords, they just take up less room.

Make the grid small enough relative to the items and you can get some really interesting exclusions. Warrior sword takes up the full horizontal width of the inventory grid, wizard staff takes up the full vertical: suddenly really obvious that you can't have both. This was the central idea I started with and thought was really cool, fitting awkwardly shaped items into a grid and their shapes really mattering. Played around a lot with fun shapes that exclude each other. Grid sizes I tried were around 5x5 to 7x7, it depends on average item area - 49 1x1 potions is too many, but 4 3x4 suits of armour is very manageable.

One idea I'd thought about was: what if some of the items affect the playing area based on their position? The level would be some sensible size like 20x20, much bigger than the constrained inventory screen, but if they're the same shape it could scale up to cover it (or maybe tile I don't know), and then some items could give you a bonus just when you're in the matching area. A bit weird but if I'm generating lots of items it could be a plausible mechanic for a few of them.
So I just had this design idea floating around for ages until with 868-HACK my conception of what constituted a plausible playing area dropped to within the same range I'd been considering for the inventory and suddenly "items affect corresponding play area" became a lot more natural because they could just be the same space. I started prototyping a 5x5 version where each item had one global effect (e.g. extra hit points) and one action you could do in that spot. Some of the actions needed resources and others were more like simple "wait" commands. There were different item shapes but my implementation of those was pretty broken, not important yet because I was just trying to get a feel for how the game was going to work. I had this lovely super-low-res style but it had huge problems with communication, trying to fit into a few pixels all the information about global and local effects and also enemies and their hit points and so on, urgh, it became pretty clear that the game wouldn't work at all at that resolution, maybe not even at a medium resolution like 868-HACK.

I put it on hold for a while making other things, when I came back to it I still didn't want to fix the item shapes so to avoid that I came up with the very convenient idea of just building it with single-tile items "for now". Of course I was going to get to it eventually because the whole point was it's cool how you can't have both a staff and a sword because they're tall and long. (Which really is a cute idea maybe I will come back to it?)

I wrote a big list of all the ideas I had for items - armour for hit points, amulet to save you once if you die in that spot, bow giving a ranged attack in that spot. Most of the active effects I had felt too much like just repackaging 868-HACK so I backed off on that, a lot of the cooler ideas were positional attack modifiers so - what if every item is a weapon? Plenty of possible hit effects, plus I could still use global passive effects on weapons with just a basic hit. Rewrote my list to all be weapons, seemed good.

One weapon was DRAGON SWORD, with the unique effect that it gets stronger if you use it to kill a dragon (or insert enemy type once I have them). Playing out the game in my head (without a digital prototype of new stuff yet) this seemed the most interesting item because you're trying to lure enemies to fight at a specific place rather than just using whatever is most efficient nearby, and because it created a progression not just a cycle where you use one weapon to gain a resource and then another to spend it. So - what if everything levels up like this? This turned out pretty important to give the game some shape, starting with everything already equipped would makes a really complicated opening and then not much variation. I had been assuming a typical structure where you're collecting better items and slotting them into your inventory as you go but this worked without that.

tools:
- steal ideas from another game and try to fix them
- always make the grid smaller
- save up weird ideas until they naturally fit somewhere
- write down all different ideas and then fit them all into a consistent structure
- simplify the design to avoid work you don't want to do
- abandon your original idea, it was just scaffolding