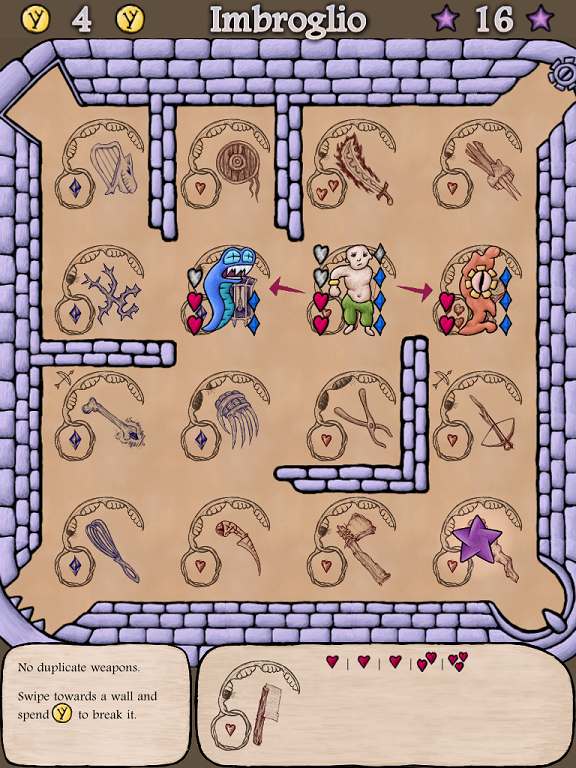 Yet another roguelike. It shares some recognisable elements with Zaga-33 and 868-HACK but I don't think it's very useful to think of it as a sequel, it has a pretty different philosophy.

Compared to 868-HACK, individual plays are longer; it amused me to fit an epic-scale RPG leveling system into a tiny grid. But each play is self-contained, there's nothing like the streak scoring system tying multiple plays together. And there's less randomness in each game because you construct your build at the start of a game rather than assembling it from random pickups along the way. I've described this as "deck-building"; that might be slightly misleading but I think it's a useful analogy; the wall generation provides the "shuffle".

You can see I've used a different graphical style to some of my other games. Don't worry I haven't abandoned rainbow glitch pixel chaos for good, just the amount of stuff that needed to be communicated in terms of the card effects called for a higher resolution display. I'd been thinking for a while about using this kind of hand-sketched style for something and it fit here. Had fun drawing a bunch of wibbely monsters and stabby swords.

As usual, chances are a bunch of new bugs will show up now that it's released. Let me know and I'll get to work fixing them.

I hope you like it! It is always a bit anxious to release something new especially when it is hard to explain. I know for some people it will be too different and for some it will be not different enough, but it is its own thing and there you go.
Posted by Brog at 09:04